The L.A. Times released this article about eight dates under $25 in Los Angeles. While I was a bit surprised that I had already done a couple from that list without knowing it was such a normal date thing to do, I wasn't happy that they would only offer up eight ideas. Call me creative but I think I could come up with a lot more than eight. Hell, give me a minute and I'll book you up for an entire month.

Perhaps it's because the L.A. Times is just facing hard times and laying off many that their employees could actually use the list of $25 and under dates. That's not bad at all. I think with the economy the way that it is and the fact that you don't want to just go around pissing money away, $25 and under dates can be fun if they're creative enough. Maybe I'm just a half way decent planner and a bit creative but here's 30 dates you could go on.

Why 30 dates? Well, I needed a witty title and theme for the blog and all I could think of was the comic book 30 days of night and the idea that Jesus did his desert wandering for 40 days. I picked the one that had more believability to it.

Also, I do not like Valentines Day. I think it's rather silly to put that much effort into one day when everyone else is putting the same amount on the very same day. It loses meaning when everyone else is doing the same exact thing. But that's a subject for another day. So please, don't do any of these on Valentines Day. Not because it's cheap but because I'd rather you do nothing on Valentines Day to rebel against the Hallmark Holiday. If you're going to use these ideas at least do them when they're least expected. The surprise will go a long way on actually surprising them.

It's not the safest thing in the world to do but if you're so inclined to play with fire, may I suggest you take it away from the Parks and Forest areas and keep it near water? In this case, the beach is a wonderful place to keep these potentially out of control blazes confined to.

It's not very known but you there is a couple of beaches on the Southern California coast that actually allow you to have a bonfire. Dockweiler Beach in Playa Del Rey is one of them. West and East of Balboa Pier in New Port Beach is another good location with less airplane noise but more OC smugness. 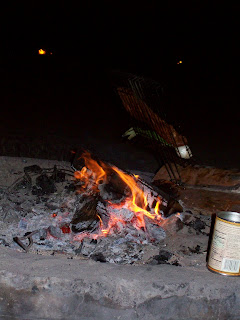 For your outing you will need the following items:

With any Beach location you're going to have to get their a bit early to stake your claim on the often in demand concrete fire pit. Bring some chairs or just use a log to sit on, a beach towel or blanket to keep you warm if the fire doesn't and you have yourself the view of the ocean on one side, lights on a hill on the other and the ever so often noise of a plane flying by. Believe me, it wont effect the mood.

The key here is that it's all covered in the fire pit there. Your food will cook over the open flame which also provides some essential warmth. The key to the food is trying to come up with some sort of contraption to hold up whatever meat you picked to cook. Remember, it's a date. So you shouldn't need more than a pound or two of whatever to cook up. 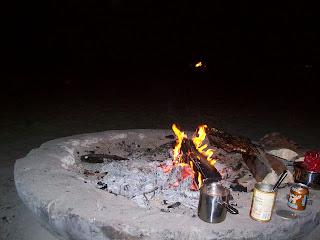 Setting up the firewood is the key here. Pretend they're like Lincoln logs and just stack them up and light the middle. All you have to do is simply learn how to start a fire and keep it going. It's so easy a caveman can do it. Well, maybe they couldn't get the whole fire thing down for a couple centuries. But once they did they stopped having to drag their potential wives by their hair and just let the s'mores do the talking.

Eventually the camp fire burns out and you're left there on the beach with the stars above you, the ocean sound constantly in the background and an evening spent talking about anything, complaining together about the sand getting everywhere and happily stuffed with s'mores and other treats all for an inexpensive but very rewarding and enriching adventure.
Posted by Booster Gold / Javier J. at 4:00 PM