I have to be honest with you folks, I don't care for Valentines Day. Here we are ten days away from that Hallmark Holiday. Ok, Nine days. Sorry, I was a bit lazy in posting this warning because I was gearing up with Superbowl related blogs. I want to remind you folks that with Valentines day comes inconvenience, cost and obligations. You have a nine day head start. I suggest you start running now.

Now this doesn't make me some cold, heartless bastard. Hell, I'm currently writing a 30 ideas for dates blog feature here. It's pretty clear that I can, when called upon, present some pretty awesome plans for a date. But I have to admit that I have no interest in limiting it to only one day when everyone else is doing it. Nor have it when stores are going to charge you up the ass for it. Valentines day has got to the point where you feel you're bent over and taking it by the flower, chocolate and card companies.

You may feel obligated to go all out with the flowers, candy, champaign or even renting out a limo for the night. Let me slap some sense into you. DON'T DO IT! Just drop out during Valentines day. You don't want to be stuck making dinner planes, reservations or hotel room deposits. If you were going to go the route of flowers you're way too late. 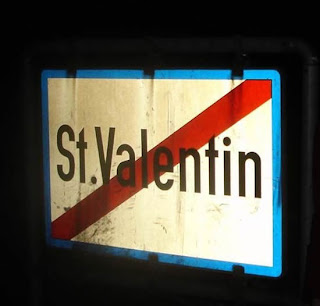 I saw on Costco.com a couple of weeks back that if you wanted two dozen roses and ordered them so far in advance, you'd be able to buy them on the cheap. But that road has come and gone. If you're late on that boat you're facing triple the normal prices for things that will die fairly soon. If you're going to buy flowers, buy them for your mother.

This view isn't jaded because of my heart being broken or anything like that. I'm actually perfectly happy in my position right now in life. I just feel like I shouldn't be governed by some hallmark holiday as to when and how to show my feelings. I will not be a slave to a holiday or be pressured into some sort of situation simply because the calendar says it's some day. Much like Christmas lost the meaning of being with loved ones and turned into a "What are you giving me" holiday, Valentines day may have, at one point, actually meant something. It no longer represents that same meaning

During this time of the month you see all those destroyed men come out of the wood work. When you go out on Valentines day you see these beaten down guys. You ever see someone who is wearing a jacket and tie and they look extremely uncomfortable because they're not normally wearing anything like that and it's clear that they're not comfortable? It looks like they were dressed by the undertaker. They'd rather be put in a casket than dress like that. They sit there and look like they just want to die. As if they'd rather be at a Carl's Jr. than at whatever food eatery they're at working on their prefixed meal. 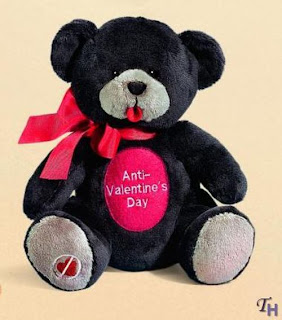 So even if you're going to your favorite eating establishment you're not going to be able to order off the menu. Add in that you're going to be going out on a night where everyone and their mother goes out and you have yourself facing some massive wait times. Not to mention terrible service. I do not envy waiters on Valentines day. You have every yahoo that comes out ONLY on holidays like this so when they give you a 10% tip and act like they're splurging on you, you have to grin and bear it. Not to mention their expectations are higher because it's a "special night out" while their manager is telling them to get them fed and turn that table around to make more money off it.

To them you're another two top table that can sit someone new after you finished scarfing down your meal. It's all about turn around and not at all about quality of food or service that matters on that night. Oh yeah, did I forget to mention the overpricing for no other reason besides they can? So when your girl is looking at the menu trying to find the most expensive bottle of champaign or wine on there, just remember that it'll cost you even more than the usual over charge for a decent bottle of wine. But hey, at least they'll sleep with you right. I mean, isn't that what the booze is for? 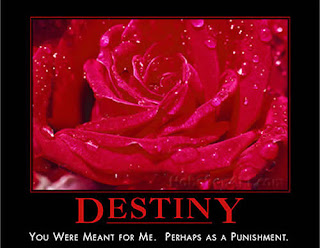 Speaking of which, what the hell is this idea that getting sex is something special on Valentines day? That somehow the guy has to earn it by doing all these feats of strength and monetary value in order to swoon the partner? The guy is also giving sex as well. I would imagine that sex is just as enjoyable for women as it is for men. Having it be some reward or gift at the end of the night really doesn't make it sound like you're into the guy to begin with. As if you're treating sex as a bargaining chip. Talk about the ultimate version of re-gifting.

The worse part is that Valentines day falls on a Saturday this year. You're going to get stuck with a weekend outing. A weekend in Vegas or a weekend in Cancun and you're going to be stuck with the bill. Is it really worth it? I have to ask this of the ladies. If the guy wont do something for you on February 9th, what's so special about the 14th that makes them any better? It's still society forcing them to do it because it's some holiday.

No matter what though, these husk of former human flesh guys are the same ones who you'll see between now and February 13th at the mall looking like the walking dead. Perplexed by how sizes work at Victoria's Secret asking the employee that closely resembles their girlfriend to try something on to see how it looks.. "You look about her size, can you try this out for me?" It's really just sad. I follow them for fun when I'm bored. I sneak into the card stores to see these guys sweat it out trying to figure out which card that would do. The reality of it is that they don't feel comfortable saying anything that card has. You just don't feel right putting your name on that card. They'd rather get in and buy something and get the hell out. You're better off handing them $50 and telling them to go to the mall themselves. "Here's a gift card, GO CRAZY!" 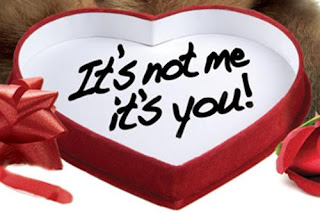 I really don't blame them. I have to ask again, why put yourself through this? Valentines day is a holiday for chicks. There's nothing in it for a guy. You don't have to share kindness on that day. I don't see why I should give anyone anymore than they give me. Materially, emotionally or any other way. Most women I have known are the cheapest creatures on Earth. So when it comes to materialistic goods, they like to receive but they don't like to give. I'm not saying all women. I know a few who are excellent givers. But like they say, even a broken clock is right twice a day. Doesn't make it any less broken.

The Holiday has its roots to when the Roman Saint Valentine was martyred for refusing to give up Christianity. How we get "send people chocolate and love one another" out of this makes as much sense as does Easters "Hide the Eggs from Jesus" does.

Now Valentines day has become a competition in consumerism. The girls at work are comparing the sizes of roses they get and it doesn't say anything more than "Look at how much my vagina is worth." It's the same when you see them showing off their wedding rings and it's really not very romantic. 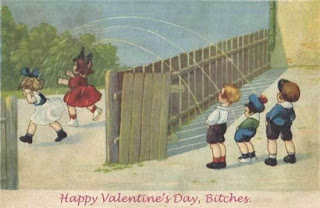 Here's an idea that you can take to the bank. How about you save the money from those roses and you invest into something with more of a shelf life. The pragmatic approach here would be to pay your god damn bills. We're in the middle of a piss poor economy and job loss is at an all time high. How about you save that cash from flowers and you don't default on your mortgage payment. That's if you're lacking the balls to not do anything on Valentines day and you buckle into the demands.

My advice? Go out to a cool, hip looking bar. Lola's is a perfect example of this. You'll get the enjoyment out of seeing those shattered men trying to make that "perfect" evening while also enjoying a couple of drinks and then the newly single women come into play. Those others who broke it up and are just pissed about the hallmark holiday will be more than happy to drink up with you.

The easy way out is simply not answering the phone on Feb. 14th.
Posted by Booster Gold / Javier J. at 5:29 PM