The L.A. Times released this article about eight dates under $25 in Los Angeles. While I was a bit surprised that I had already done a couple from that list without knowing it was such a normal date thing to do, I wasn't happy that they would only offer up eight ideas. So I'm making my own list. So far we've gone through 3 options of economically friendly fun dates. Some of these are things I've done and enjoyed. Some are just ideas of things that would be great date options.

Kogi And The Pier

If there's one thing I have admitted to being addicted to, it's Tacos. I love my street food like no ones business. There's something special about food being cooked right in front of you. As for health concerns, seriously, don't worry. They're there to try to make a living. Repeat customers are what they want. So while it may not look as clean, you shouldn't ask how sausage is made. 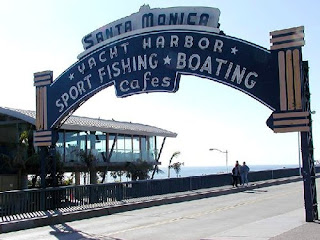 The Santa Monica Pier is a bit of a cliche date but it's cheap and has a lot of fun date potential. Parking is about $5 in the beach side parking or you could just park on Ocean somewhere and walk down the ramp onto the pier. It has been going through a lot of changes lately.

On the Pier you'll find an old style Arcade with plenty of fun games for the two of you to enjoy. Ski Ball and Air Hockey. Tickets dispense in that old fashion way after games but who's going to spend all that money for a plastic comb or fake mustache? Best to just enjoy the friendly competition with each other. Make a bet on the games. It'll add a little kick to things. 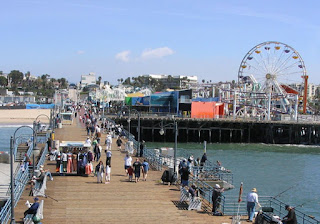 I'm a sucker for Photo Booths. They're great and their dirt cheap. $3 for a couple of silly faces. The arcade has one and it's typically forgotten by the youth today. It's really cliche, I know. But it's cute in a way. So let yourself go and you'll have a picture that captured the evening.

Also on the pier is Bubba Gumps. A really generic chain restaurant but it has a good advantage - It serves alcohol without a cover. Head on over after or before (if you want to make ski ball even more interesting) the arcade experience and you'll put a little sauce into your systems.

To round out the evening you can take advantage of what a pier is all about, extending land over ocean and walk to the end of it. Look over the edge and see nothing, then look over at the smile on your date and things will be pretty peachy. 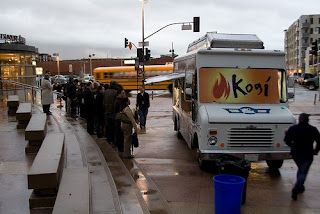 While you're in the Santa Monica area, the second part of this date is more of a game of Where's Waldo in search of the Kogi Taco truck. Kogi is a Korean Taco truck that was so good I had to write about them. They're sweeping the scene as a new hip 2.0 taco truck. Not many taco trucks can say they have their own website and not many taco trucks offer something completely different and good all at the same time.

To sum them up, they make tacos with a Korean kick. Using short ribs and spicy chicken and pork the taste is out of the world. Finding them is also an adventure in itself as they have a few spots they go to. It's sort of like a puzzle you'll have putting together. If you want some clues you can follow their exploits on twitter to find their latest locations.

Once you do track them down, for the sake of this date, I'd advise for the Venice location most nights after 10pm at the Brig, you'll have a good time trying to come up with how you're going to tackle the meal. Get your order in, get your food and go sit by the curb, you'll be surprised how good hot food on a cool night with a beautiful date can be.

You wont even care if the breath smells of kimchee from the kimchee quesadillas. The food will hit the spot and since this is an up and coming craze, you'll both share something that will eventually be as big as, say In-N-Out. Ok, maybe in 40 years time. But hey, it's the time shared and the good food and moments treasured 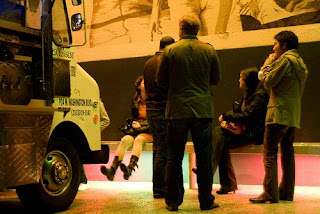 A walk on the boardwalk and some new fusion tacos. Total cost comes to a low price depending on if you get the alcohol on the pier or not. Taco truck shouldn't be more than $15 and the games on the boardwalk are a couple of bucks. You'll treasure the late night moment together and have filled bellies.
Posted by Booster Gold / Javier J. at 7:38 PM