Oh Ashley, You So Crazy

Oh Ashley, You So Crazy

I've been hearing these ads on the radio for some time now and I just have to wonder what's the point? I realize online dating sites are big and all, but is there a need for an online dating site specifically for adultery? I won't get into the annoying jingle yet but I will lay out the average commercial for this site:

Girl: "Oooooh I'm so happy - I'm finally getting what I want in bed!"
Girl2: "Oh, did Jeff take some pills?"
Girl: "No, it's not Jeff - I met somebody on the internet who can satisfy me"
Girl2: "Oh wow - does he have friends!?"
Girl: "You don't need his friends - AshleyMadison.com has it all!"

They then lost the stupid slogan of "Life is short, have an affair" but losing that didn't help them get any class. I'm told that they show this commercial regularly during "Cheaters" ironically. Which is to be expected, shuffled in the late night time slot along with those sex hot line ads. But it seems Ashley Maddison kicked it up a notch and pushed for this ad to be put on the Superbowl. It was only shown in Texas. Which makes perfect sense.

I have to ask... WHY? Why is there a need for a website devoted to allowing married people to cheat? You really don't need a website to find someone to cheat with. As with all things, I suppose it would just make it a bit simpler, and a bit more anonymous. Which I guess is slightly better than having them cheat on you with your best friend or something.

Let's clear something up. Divorce doesn't carry a wide social stigma these days. Perhaps in some wing nut religious circles, but by and large, it's an accepted, healthy practice. Some perfectionists might hold THEMSELVES to high standards and consider divorce failure, but that's their own psychosis, not yours. If marriages fail these days, counseling followed by divorce are the socially accepted options. Divorce, arrived at properly, is success at analyzing your relationship and making the intelligent decision about its viability. 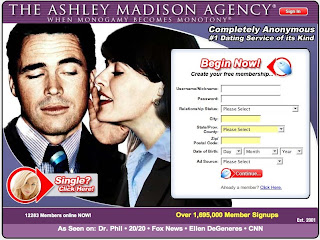 The first sign you're a scum bag, you see this screen.

If you're getting married, have the balls to lay out the ground rules with your spouse. Tell them you plan to be faithful to the contract, or tell them you plan to safely fool around once in a while. Give them the truth, which gives them the power to make the same decisions for themselves. It's the caring thing to do. Then again, it would also be the caring thing to NOT fuck around with other people when you're in a relationship and actually care for the person.

Cheating is more than just sex, you are exposing your partner to STDs usually without their knowledge. It's bad enough to stab someone in the back, but to possible expose them to a potentially deadly ailment without them knowing adds to the offense. If you have the need to fuck around, why be in a relationship to begin with? That's what I don't get about all this.

If you don't want to get married, that's more than perfectly fine. Advantage of marriage seems to be the whole tax breaks because it's certainly isn't any sort of security of having a life long partner. You can get tax breaks by incorporating as well, I think. And unlike marriage, you can incorporate with more than one person at once! Unless you live in Utah. In which case it's perfectly legal to marry more than one person. I just have to question your sanity at that point. 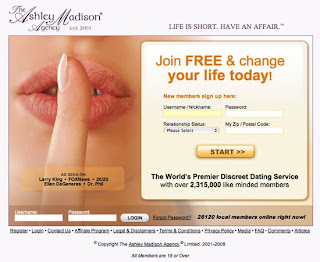 This leads to a new question in spicing up your marriage. Why not just have your wife dye her hair and take off your glasses? Instant stranger. It's kind of like a new woman. If you squint your eyes really hard and really imagine it.

The people who use this website are complete pussies. They're the type to bet both on red and black at the Casinos. I never got that mentality. You're not winning anything. They think that if they have someone at home, they'll always have sex when they want it. As if they lack all confidence in their ability to seduce someone. Really says a lot about a person that they're so morally corrupt and see themselves so low. I guess it's a good reflection because they are indeed pieces of shit.

When you are in a relationship with someone you are basically saying "Hey I like you and you're the only one I want to be with for now". Relationships are also built on trust (yes a cliché, but still true) and being comfortable with the other person. If you want the other person to worry, feel like shit and not trust you and finding out that you have been screwing around behind their back, sure go ahead and be that ass hole. 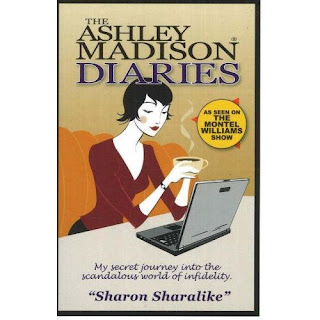 Maybe the lesson of this is that the moral and the social standards are showing us that marriage is outdated? Assuming there's no religious motivation, there aren't many significant perks to it. A legally-binding contract just cheapens the whole experience, anyway. Maybe I'm just overlooking the tax break? I think it's been a tradition for generations now to get married for the tax break.

Marriage seems to be a holdover from earlier times that won't go away. It really only makes things messier for people given the divorce rate, but I suppose it reinforces the need to stay together for the children in some cases. I don't care if people sleep around in an non committed relationship, but cheating is awful. Getting caught cheating is going to hurt your kids just as much as, if not more than, getting a divorce.

You people do realize that you don't have to rush into marriage. There was a time when you would date one person one night and another the next. You weren't considered serious until it was made perfectly clear between the two parties. It seems that these days people just rush into marriage and then they regret it down the line or look back and feel like they didn't experience life. While at the same time they feel like if they risk finding someone new they'll lose the steady, but doomed relationship they are currently in. Maybe that's why marriages aren't lasting long. People fool themselves into thinking they're happily married only to find out years later that they aren't. 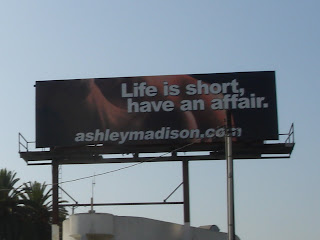 I'm wondering about the fabric of our society when this type of thing is advertised during the Superbowl. I mean it is blatant unashamed moral failing. Kinda like seeing an ad for Joe's beastiality farm while watching The Office. I am just surprised how easily we accept this kind of thing now days that we allow it in the mainstream.

I'll just finish this off with this. There is never justification for adultery, and anyone who thinks otherwise is a morally bankrupt asshole. If you don't want to be in a relationship with someone, or if they're not getting the job done and you have communicated your problems, leave them. Flat out leave them. Life is indeed too short, but it's also too damn short to string someone along who you no longer care enough about that you're cheating behind their back and violating a commitment you made to them. To do anything less is to be a pussy coward and just shows how selfish you are trying to have eat your cake and have it too.
Posted by Booster Gold / Javier J. at 5:46 PM

If you have the need to fuck around, why be in a relationship to begin with? That's what I don't get about all this.

THANK YOU. Finally, a man echoes my sentiments.

You make valid points. I think that there are certain situation where blah blah blah results in blah blah blahblah, but overall, I completely agree w/ you--and the fact that we're such a pussywhipped society of internet losers that we can't even find our side lay in real life anymore kind of makes me sick.

We may share a first name, but Ashley Madison can suck it. In the non-hot way.