Dying To Get Old

Dying To Get Old

Again Chicago, you show us what's wrong with America... Well, at least what's wrong with Chicago. Sure, you give us deep dish pizza and one of a kind hot dawwwwgs. but you also bring about corruption in politics and for the sake of this blog, piss poor retirement homes.

It seems that retirement homes are now being rated on a scale of 1 to 5. This is where your kids will place you after you're retired from your job at Wendy's when you turn 70 because the economic crisis is still going strong. Chicago's retirement homes are scoring in at a record low 1

The inspectors knew there was trouble as soon as they entered the nursing home.

The lobby smelled of urine. In one room, they found a 97-year-old woman, lying in her own waste. She had severe bruises on her arm, foot and both legs that the staff could not immediately explain. Another resident had a bed sore larger than a golf ball and dripping blood.

This was life in one of Illinois' "one-star" nursing homes.

America, the land of plenty! But surely the government is doing something about it

The federal government is now rating nursing facilities on a 1 to 5 star system. Although conditions at one-star homes are startling, what is perhaps more alarming is their prevalence: About a quarter of U.S. nursing homes, including 81 in the six-county Chicago area, received one star.

But but but that's too bleak for me to accept! At least the staff is hard-working and dedicated to helping the seniors, right?

At the Embassy Care Center in Will County, residents last fall complained of cold food, staff not answering calls for help, loud employees keeping them up at night, and workers not relaying phone messages from family members.

Residents said that when they voiced concerns, staff responded at times by pointing to the cemetery across the street. State investigators cited the nursing home, concluding that residents could not speak up without fear of reprisal.

I hope you understand this is where you're going folks, what with the incoming Greater Depression and all. I'm pretty sure this will be a 3-star in a few years. It just needs a little work. At least it's nice to see how Baby Boomers treat the Greatest Generation, which is just like anything else the Baby Boomers do - They destroy it with selfish neglect.

I guess the only sign of comfort is that those same Baby Boomers are going to be suffering because the piss poor economy just slashed their 401k's in half. Our parents are going to live with us just like their parents did until they are too demented to notice. At which point it's straight out to the nursing home! 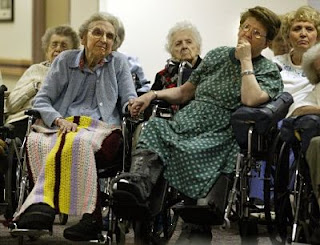 I guess it comes full circle. You live, you work, you get old, you die soiled alone and in pain. When the next generation has to pay for our own social security. Oh wait.. the jokes all of us. None of us are going to live that long.

-Go to school, you can pay off your debt
-Work hard, you'll be able to earn a living
-Put some money in retirement, you'll be living the good life in a few years

you can do the first two with a little hard work, the last is where they get you. 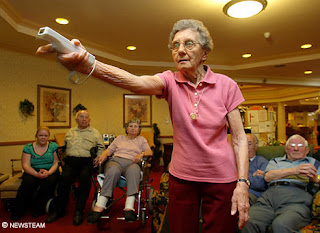 At least you'll get to play Wii when you get old.

Getting old in America is horrific. We've got a serious cultural death-fear but don't really do much to support life in cases where it can't be bought and paid for. The pulse is the important thing, as long as we're prolonging biological life we feel entitled to a pat on the back. One would think that we would be proud of getting old. At least after you get over the hump of turning 30 and realize you still have 50 more to go. One day you wont be able to wipe your own ass. Someone else will have to wipe it for you. Accept it. Embrace it.... Go right ahead and let it all out. I mean the fear, not your bowels.

Also "nursing home staff" is right down there with "telemarketer" for shit jobs anyone can do. More so with nursing home staff, even, because it pays well. And nobody in our society trust the elderly when they try and tell us how bad it is. You just peg them down as telling crazy stories.

One of my first jobs was in a nursing home and they're universally shitty. I was the only 15 year old with retirement savings. I'm willing to bet I may have been the only fifteen-year-old period. 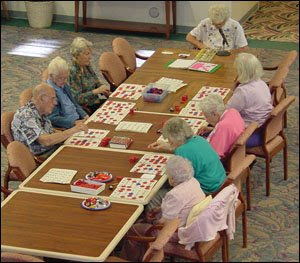 I worked full time at a bankrupt nursing home one summer. Or, I guess I was technically a volunteer, but they had so few staff they could pay that they scheduled me working 60-hour weeks so that people there would die less.

You can often tell how bad a bad nursing home is by the smell in the hallways. Something just isn't quite right in some places. This place, however, was bad enough that sometimes you just had naked, senile women and men wandering the halls, and the smell test was no longer necessary.

Watching women cry that they have lost their house keys, when they have lived in the nursing home for months...or asking where their dead husbands were, or when their kids were coming to visit today when they had already just come and left.

Their beds are by the door, as they stare out all day, hoping their children will visit. They have a phone next to the bed, just in case. Just in case. 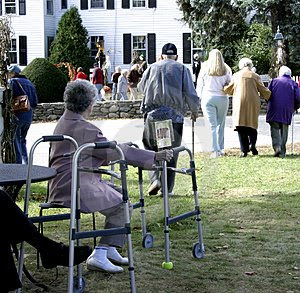 I have to say though, the elderly do have a lot to teach us if we just listen and filter through their mindless rantings to find those golden nuggets. I sent my grandma a letter that said "Hey grandma, you're old, give me some advice" more or less. She sent like 10 handwritten pages with a numbered list of advice.
1) was "always wear a condom, never trust girls who say they're on birth control, and don't let them push you into getting married or having children"

I can already see the next generation talking to their elders.
"SHUT THE FUCK UP GRANDMA IM PLAYING XBOX"
To be honest, I guess that's this generation as well. Oh god, old age sucks I can't deal with it I'm just gonna shoot myself and smear my gray matter all over the kitchen wall and my daughter will probably have to scrub that and pay for my funeral cause the life insurance doesn't cover suicide/kitchen cleaning.

Hear me out, just hear me out here.....
We strap bombs to 'em and send 'em to Afghanistan. I'm leaving instructions for my children to trick me into suicide bombing something when I get senile. Not even the fact that pricks like you youngin's are paying for my social security would be enough to make life worth living! All I'm hoping is for better ways to halt Alzheimer's.