The L.A. Times released this article about eight dates under $25 in Los Angeles. While I was a bit surprised that I had already done a couple from that list without knowing it was such a normal date thing to do, I wasn't happy that they would only offer up eight ideas. So I went ahead and I challenged myself to come up with my own amount of cheap but entertaining dates to go on.

Some of these were ones I planned, others are ones I did with a bit of a hindsight twist after doing them and then there's those that are just plain out there ideas. Since it's been two days since the first was posted, I figured that this wont be a daily thing. Much like showing up on time, I'm sure I'll fail if I stated that. But I'll try to do this daily.


Soda Pop And BBQ That Hits The Spot.

It's very simple. You don't have to get her drunk on every trip out. Sure it helps make you sound far more interesting than you really are, but what happens when the hangover is over? Stick with some Pop/Cola/Coke/Soda.. whatever you call it, it's something that takes you back to when you were a kid. Not to mention that it's rather tasty. Perhaps it'll be a way to keep the romance from fizzling. I stopped drinking soda in general. I personally make it a treat when I do get it. Something special. You may guzzle it down like no ones business but even this place will make that carbonated drink special.

Start the date off by making your way to Galco's Soda Pop Shop in the Highland Park/Eagle Rock. This is one of California's Gold and a walk through their produce section that is nothing but seldom seen, but delicious candies and you'll know you and your date will be feeling like kids again.

The store offers nothing but the good stuff. Soda, Candy and Beer (in case you just give up on sobrity) with a deli counter for sandwiches and a feeling once you walk in like you're in a 50's grocers. Again, this place offers the best selection of soda possible. If there's a drink you haven't been able to find or if you're daring to try something new and tasty, this is the place for you. You can also find out what your date's taste is like from what they choose. 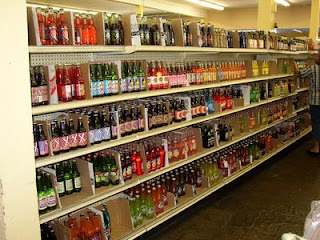 The gems here are the original flavor Dr. Pepper and Coke made with pure cane sugar. Most of the sodas here are made with pure cane sugar and you can taste the difference. Forget that corn syrup stuff, that really just makes a soda taste boring. Other strange flavors include ones of different flowers, cucumbers and if you never tasted sarsaparilla, do so. You'll know what grandpa is ranting about. Cause they sure don't make a good one anywhere in the city.

The idea here is to get yourself and your date a total of six or seven sodas to split. Be a little daring while also sticking to stuff you'll like. Prices range between a buck to two for each bottle and you can buy singles or a six pack at a time. There's cold versions of most of the more popular sodas. Shouldn't cost you more than $10. Get your soda and after walking through the shop commenting on the different sodas head on out.

After you've blown however much you were going to blow on sugar water, make your way over the little hump of a hill and onto Colorado Blvd. where you will find The Oinkster 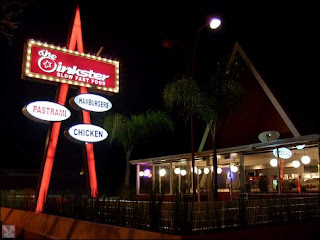 Combine that with the sodas you just bought and that should hold your stomachs well enough for the time being. Don't drink all those sodas just yet, make some room for the amazing Ube Milkshake. But watch out, your date will more than likely NOT want to share much of it with you. If that happens, don't worry. It doesn't mean that they don't like you, it's just that it's really really REALLY good.

There you have it. You should have something interesting to talk about from the two locations there and plenty of enjoyment for your bellies to make that date something to remember.