Marvel does this every couple year or so. Well, as often as they can. They have a mega event that you have to buy every single comic cross over spread across the shelf for in order to make heads or tails on the story and once thats over they just start up a new one. It's like they know how to squeeze the money out of us nerds.

There should be some sort of law against this sort of action. How am I suppose to keep up? And now they're advertising the hell out of this event. Which is for Dark Reign. Last year the world was under attack by shape changing Skrulls who made all the heroes question who was themselves and who was actually an alien in disguise. It was a complete run around and while it was fun, the only thing that seems to come out of it seems to be that the bad guys came out looking like the heroes.

Our villains, Norman Osborn specifically, came out ahead in the publics eye because of the event. Now he has control over what happens as he's the leader of the world police force named HAMMER. Heroes who don't sign up with him and fall in line are now the bad guys and will be hunted. Those who do.... well, they're just sell out dicks.

To peak the nerd attention they released a couple of pictures of this event to just get us drooling. Let me tell you it's NOT.GOING.TO.WORK! Damn you for trying this Marvel. I don't want to spend all my money on your product! I told myself I'd curb my comic buying!

To better get you aware of the changes ahead in the Marvel Universe, I'm going to help you with this by describing what's going on. 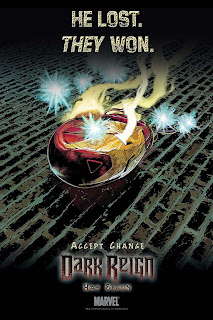 Besides being a mean drunk, Tony Stark is now on the run. He's a wanted man. Not because he's Robert Downey Jr. No, no. but because his Stark technology seemed to allow the aliens to kick our ass so easily. With Iron Man on the run this image is simply trying to show they're trying to get his ass. Oddly enough we wont get Bush to be accountable for his actions but we'll get Tony Stark to take the blame because aliens hacked into his system... Hmmmm 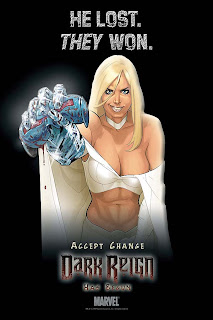 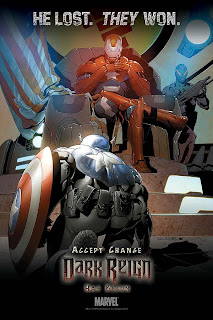 New Osborn, who you'll read more about later, is now using Iron Man's armor and is walking around like he owns the place. In this picture he has the new Captain America, the one who used to be Captain America's sidekick (It's complicated, don't ask) is, in this picture, bowing to him. I wouldn't take too much stock into this. I'd say, at best, this gets New Cap to get into the role as leader. But I suppose it does entice folks into buying more comics. 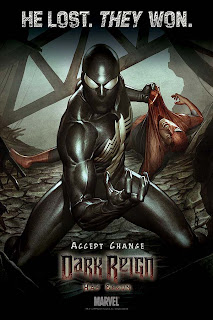 Spiderman has gone through a lot of shit lately. He made a pact with the devil to save his Aunt May, because he's a big ass pussy and can't let the status quo ever die, but because of that he lost his marriage. He turned to his black costume and then went back to the regular one. So the public doesn't know what the fuck to think. Venom, that huge black spiderman looking villain took this and ran with it as he's not going around looking just like Spidey in a black costume. Guess the down-on-his-luck Peter Parker isn't going to have life any easier in this whole Dark Reign.. 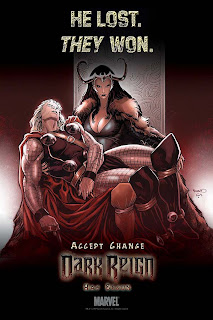 If you're not reading Thor... well, then you're more than likely not a comic nerd. But to sum it up, he's the God of thunder and all that jazz. His trickster half brother Loki got him kicked the hell out of his own land and now he's just making his life a living hell. It's actually a very good read. Well, if you can make sense of the numbering on how a new Thor series went from issue #1-12 and then jumped to Thor #600... Yeah, I dislike the marketing of comics. They restart a comic to #1 to boost sales and then revert back to the old numbering? Seriously, what the fuck! Nerds are suppose to be able to do math and I know 600 doesn't come after 12 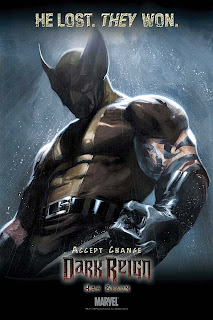 But they also made it that Wolverine has a kid who has the same sort of three claws. Only one is on the palm side of his hand. Oh yeah, he's also edgy with tribal arm band tattoos... Well, he's the new wolverine in these dark times... at least he's dressing as wolverine. 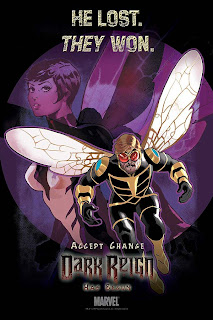 The biggest fall out to Secret Invasion was the Wasp dying. For a character made famous only because she was the victim of domestic violence at the hands of a B-rate hero husband of hers. So it looks like Hank Pym, who was abducted for years by the skrulls, is now back in the fold of being a hero. He also changed his name and costume to honor his now dead wife... who he once beat... Yeah. Creepy doesn't cover it well enough. Norman Osborn, who you will remember as being played by Willem Dafoe in the Spider-man movie. You know, he was the crazy Green Goblin guy. Well, in Secret Invasion he shot the leader of the skrulls with an old gun and became the most loved character since Sliced Bread man. Only downside to this hero worship is that he's still crazy with the whole Green Goblin split personality even though he's now the head hancho of the worlds security. Thus, Dark Reign.

Now that you're all caught up with what's going on in the comics let's move over into the Marvel Movies realm. Edger Wright has released some very exclusive Thor casting news... 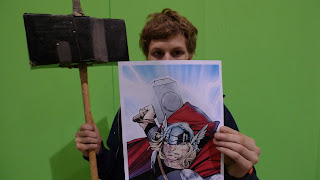