Selma Hayek's Boobs Can Save The World

Selma Hayek's Boobs Can Save The World

I always said that she could cause world peace with her breast and I wasn't that far off. She can at least cure world hunger. With her actions last week she showed us all how with the simple words of 'I had milk so I breastfed baby'.

HERE is the amazing moment when Hollywood actress SALMA HAYEK breastfeeds a stranger's baby in Africa.

The Ugly Betty star was visiting a hospital in war-torn Sierra Leone when she met a woman unable to feed her starving tot.

Salma gladly came to her aid and fed the baby, ignoring the TV cameras.

Salma said: "The baby was perfectly healthy, but the mother did not have any milk.

"He was very hungry - I was weaning my daughter VALENTINA, but I still had a lot of milk, so I breastfed the baby.

"It was amazing because he's really looking at me and he's very little. My baby is one year so she can suck a lot harder."

This is one of those sometimes.

When I saw this I couldn't decide if I was touched or a little creeped out. I mean, who just randomly feeds a baby who isn't their own. I put that behind me and you have to admit that Salma Hayek isn't just doing humanitarian service as a flyby photo op, so good for her. 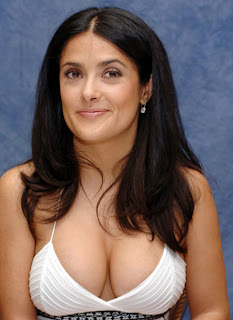 Yep, She has milk alright...

Upon sharing this news with a friend, they jumped on the "Aren't her breast fake anyway? I am embarrassed to say that I wasted* 10 minutes of my life googling to find the answer as to whether they were real or not. The answer appears to be 'maybe'.

Even if she isn't all real, she had boobs to begin with and isn't super thin. So if she did, she didn't go super huge from where she started. When you have some fat tissue around the implants I'm sure they'll look more natural because it blends in better than tightly stretched skin around a bag of water. But then I remembered again that I wasted 10 minutes googling this stuff and shook my head. 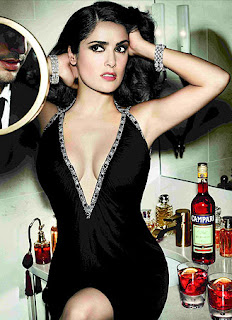 Back on Selma's breast, they can save the world! They should be a recurring character on Heroes. I'm sure then the show wouldn't suck so bad. Breast can win against bad writing any day, just ask Baywatch.

At first I thought this was an act of kindness to a starving baby. But then I remembered what Fox news said about Selma and here ADDICTION to breast feeding.


The actress, who gave birth to daughter Valentina in 2007, says she can't stop breastfeeding.

Clearly this was just a quick fix. Then again this was a situation where both parties were getting something out of it. Just imagine. One day, that kid can tell his friends that they sucked Selma Hayek's tit.

Now how do I fool her into thinking I'm a tiny starving baby? 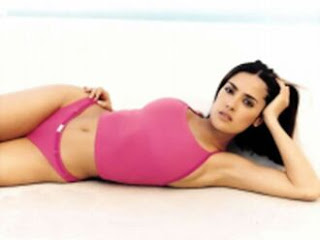