Forget Your Heart, Give Me Your Kidney.. In Your Pants

Forget Your Heart, Give Me Your Kidney.. In Your Pants

It's not uncommon to expect someone to give you their heart as we get closer to Valentines Day. But who needs those? I say forget that. I'm a drinker and you can never have enough kidneys in case I need another one after a night on the town. But the whole idea of operation just seems very very scary. If only there was another way to get someone to donate a kidney to you? Oh wait... I think something just happened. Yes, It looks like those crazy doctors are on the case as Doctors went crazy and found out a way to pull out a kidney from a womans vagina!

In what is believed to be a world first, surgeons have removed a healthy kidney via a small incision in the back of the donor's vagina.

The operation, known as a transvaginal donor kidney extraction, was performed on a 48-year-old woman who was donating a kidney to her niece.

The surgery took place on Jan. 29 at Johns Hopkins Medicine in Baltimore, Md., and both patients are reported to be doing well.

For the procedure, surgeons send two wand-like tools through small incisions in the abdomen, while a third flexible tool with a camera is placed in the navel.

The surgery takes about three-and-a-half hours, which is about the same amount of time as a traditional kidney-removal procedure.

The operation has been done before to remove cancerous or non-functioning kidneys, but never for a healthy kidney donation.

The procedure is designed to avoid the 12 to 15 centimetre abdominal scar that kidney removal surgery leaves behind. The new operation left the donor will three pea-sized scars on her abdomen.

"(The large) incision is thought to significantly add to the patient's pain, hospitalization and convalescence," surgery team leader Dr. Robert Montgomery, chief of the transplant division at Johns Hopkins Medicine, said in a statement. "Removing the kidney through a natural opening should hasten the patient's recovery and provide a better cosmetic result."

Transvaginal kidney extraction is part of a new set of surgical procedures known as natural orifice translumenal endoscopic surgeries (NOTES), whereby surgeons use a natural orifice to remove organs and other tissues.

I just hope surgeons don't plan on getting that creative with males. Because I can tell you right now if I'm ever feeling generous enough to donate something and they're like step one is we cut a hole in your sex organs there's going to be a bugs bunny-style Squiggle shaped hole in the nearest wall.

Does this mean doctors world wide are searching for ways to take your liver out your anus? Or any other organs out the anus? That's somehow frightening and fascinating to me all at once. I can hear the Mexican drinking trips gone wrong lines now
"He woke up in the bathtub, surrounded by ice, and his ass hurt like he'd just passed a subway car." 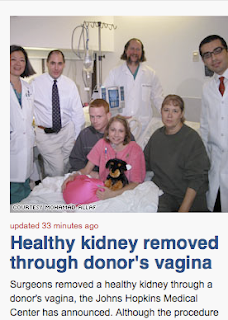 But let's try not to work from the front, Doctors. It would be a pretty tight squeeze trying to pull organs from a dudes urethra. I don't know if women have anywhere near the same attitudes towards their genitals as men, but I can't imagine this being all that helpful in encouraging live kidney donation. 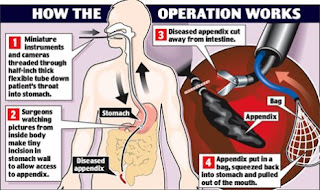 Yeah, doctors love thinking up this stuff. They have been doing the vagina thing for a little while, but they also like going through the mouth which scares me. They stick huge endoscopes and whatnot down someone's through... ugh.

I honestly don't know why, but the thought of taking your appendix out through your mouth disturbs me more than the kidney/vagina scenario. No matter what, I won't be impressed until a doctor can pull someone's vagina out through their kidney.