Living On A Prayer

Living On A Prayer

I think that'll be the reoccurring religious theme blog. Or maybe not. Who knows. I just found these news pieces relating to the big G to be weird.

A nurse figures that medicine isn't enough, prays and then gets suspended

A Christian nurse who was suspended for offering to pray for a patient says she cannot divorce her faith from being a nurse.

Community nurse Caroline Petrie, 45, from Weston-super-Mare asked an elderly woman patient if she wanted her to say a prayer for her recovery. The patient complained to the health trust about Mrs Petrie's actions.

Let me just say this, being offered to be prayed for is not very comforting in a hospital. In fact, there was an actual study that showed people who got told they were being prayed for got worse.

In another of the study's findings, a significantly higher number of the patients who knew that they were being prayed for — 59 percent — suffered complications, compared with 51 percent of those who were uncertain. The authors left open the possibility that this was a chance finding. But they said that being aware of the strangers' prayers also may have caused some of the patients a kind of performance anxiety.

"It may have made them uncertain, wondering am I so sick they had to call in their prayer team?" Dr. Bethea said.

So perhaps when this nurse asked if they could pray for the patient, they should have thought otherwise. I guess I wouldn't be offended if someone offered to pray for me. But it's not going to reassure me that I'm in a good position fighting for my life. More along the lines that my condition is so severe that, as an atheist, even I should consider asking for some higher intervention. To me prayer in a hospital brings up nothing but images of last rites. So by all means, don't ever pray for me. Just let science do all the work, please.

It is troublesome to think that any nurse clueless enough to think that offering to pray for people in a country as secular as the UK or even in the US was a good idea. Worse off, she's been warned by her superiors before about praying. Even odder and borederline offensive is that instead of realizing that offering to ray for people was a bad plan, after it was pointed out to her with a suspension, she essentially said "I can't help it." Um... sorry, but yes. Yes you can help it. You don't want to get fired then you'll stop doing actions that your higher ups deem unfit. 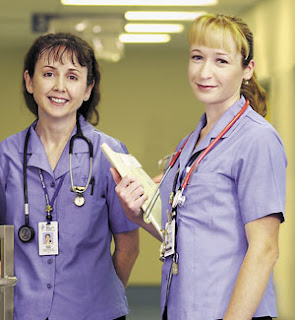 The power of christ compels you to change my bed pan

Now don't get me wrong. I'm not the type of atheist that will got all pissed if you told me God Bless You when I sneeze. And I realize that if someone is going to pray for me it's because I'm in a difficult situation. It's pretty much the religious version of "I'll be thinking about you, hope everything turns out ok." But again, the nurse was told by her bosses that she needed to stop asking folks if she could pray for them.

I realize us atheist can be such obnoxious assholes sometimes. But at the same time you'll never hear me ask you "Would you like me to consult Odin about your wounds? I believe he has the knowledge to assist in your recovery. Shall I bring out the beer and Valkyries?"

Though I have to say, if she believes in magical healing fairies then why the hell is she a nurse? I don't want to go to the dentist and have the doctor hope that my teeth get fixed or my cavities go away. If I wanted some prayer I'd request for the hospital priest to come up. Doesn't every hospital have one on hand at all time to perform last rites and all that jazz? As the nurse, just work on me. 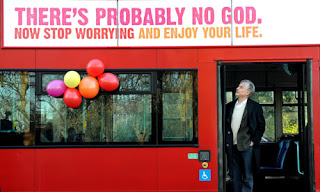 But I understand that us atheist can be pretty crazy. I dislike the smug self-righteous atheist just as much as I dislike the religious nuts who try to cram their belief down everyones throats. You know, those atheist who try to ban "In God We Trust" from a dollar bill, ban church bells from ringing and saying "Merry Christmas", even though religion and Christmas is like expecting flavor from imitation crab meat. 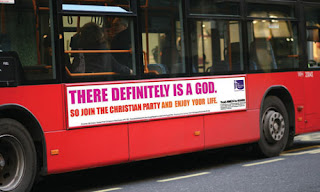 Went from Probably to Definitely.. That bus has some conviction.

Atheists being extremists is counter-intuitive. Because we don't follow the norm, it gives us the freedom to appreciate and experience other things without being offended. It's a strange thing to me to see those buses in the U.K. that are really blunt with their message of there being no god. On one hand, I agree with them. On the other hand, they make the whole image of an atheist seem a bit harsh. 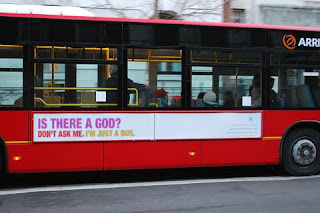 You tell them, bus. 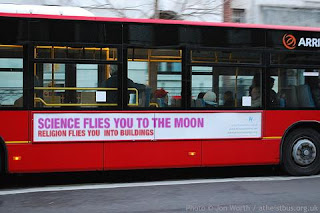 So perhaps we should all keep our own damn beliefs to ourselves and I'm sure we'll all be better people in the long run because of it. You believe what you want. I'll believe what I think is real. No conflicts. No wars. No religious persecution. Most of all, stop praying for me and get me some more morphine.

At least I'll need some heavy drug to deal with this soon to be rivalry between the religious nuts and the atheist extremist.

You see those buses have lead groups to go on to fight back with their own little campaign. And what better way to spread you message than with Facebook.

In response to the recent campaign - 'There's probably no god. Now stop worrying and enjoy your life', we've started another campaign:

There probably is a God. Now stop worrying and start looking for him. He is everywhere.

Lets have some fun with this!

Thousands of flyers have recently arrived, they look great. If you would like some here's what you'll need to do. Make out a cheque to ENGAGE for flyers (And you may wish to make a donation to the campaign). Tell us the quantity you require. Let us have your office/home address.

Oh Facebook, is there a group you wouldn't create?
Posted by Booster Gold / Javier J. at 11:47 AM