Dear Santa, Please Stop Them From Beating Zombies Into The Ground

Dear Santa, Please Stop Them From Beating Zombies Into The Ground

On this December morning, I'm going to do what is potentially the last zombie blog post I will ever do. Oh, who the fuck am I kidding, I've attempted to find something zombie related to write about in every month this year, but this goal, to end the zombie post is for a good cause. I don't know when it happened,

So when did zombies go from being good movie monsters to being lame nerdy punchlines?

Natalie Portman to star in Pride & Prejudice and Zombies film.

If all of the film adaptations of Jane Austen's "Pride and Prejudice" have left your brain numb, this one may really kill you ... in a good way.

Natalie Portman has signed on to produce and star in the movie version of the best-selling book "Pride and Prejudice and Zombies," written by Seth Grahame-Smith and, uh, Jane Austen.

This expanded version of the Austen classic adds a twist on the well-known love story when the outbreak of a deadly virus begins to turn townsfolk into killers. Elizabeth Bennet struggles to balance her blossoming love for Mr. Darcy with her obligation to kick some zombie butt.

My reaction.. FUCK THIS GAY WORLD. 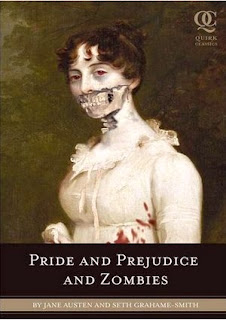 Hopefully this will go the way of the other "internet sensation turned film" I Hope They Serve Beer In Hell and tank horribly. The book was a ridiculously stupid cash grab. It's just the text of the original book in its entirety with a few extra chapters about zombies sprinkled throughout that relied entirely on the internet's "lol that's so random/ironic" reaction. It's pretty much the embodiment of everything wrong with humor thanks to the internet.

It's so awful that any scriptwriter would pretty much have to throw all of it out the window and start from scratch to produce anything near a watchable movie. Much like Snakes on a plane, the joke is in the title and that's pretty much all you can squeeze out of it. 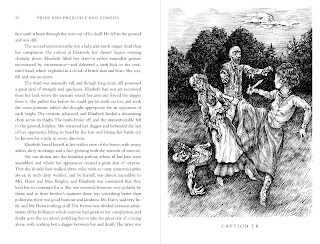 I guess they haven't reached the peak of destroying the once respectable monster until they turn sparkly and have unhealthy stalking relationships. But it will be a long way before you see a sort of Twilight for Zombies. But apparently Portman loves P&P, and wants to cash in on this craze. I'm really not sure what to make of her latest career moves. Oh well. That crush I used to have on her will forever stay in the past.

I'm getting pretty tired of this zombie circle jerking. They have been running this whole zombie fascination to the ground fast. According to a very brief Amazon search there is also:

-Vampire Darcy's desire: A pride and Prejudice Adaptation
-Pride and Prejudice and Zombies: Dawn of the dreadful
-The Undead world of Oz: L. Frank baum's The wonderful wizard of Oz complete with zombies and monsters
-Sense and Sensibility and Sea Monsters
-The War of the Worlds Plus Blood, Guts and Zombies
-Adventures of Huckleberry Finn and Zombie Jim: Mark Twain's Classic with crazy Zombie goodness,

I guess aliens alone aren't nerdy enough for War of the Worlds. And how much more fucked up can the Wizard of Oz world get? It's bad enough they raped Frank L Baum's stories for all they were worth with the many fan fictions to follow, but do we need one with zombies? Hell, Tip already creates zombies using magic powder on a wooden seesaw and a scare crow named Jack.

It looks like the formula will remain the same though. Public doman work of fiction + A few pages of supplementary monster stuff + commission an artist to do illustrations + free advertising due to it going "viral" on the internet = profitable work of fiction for about a week's worth of effort.
Posted by Booster Gold / Javier J. at 8:11 PM