Hey, do you remember when Burger King did that viral marketing thing where there was a fake chicken with lots of preloaded commands and it gave the appearance of being live because they taped the chicken doing hundreds of things and mapped them to tons of commands?

You do? Well, since it was such a great idea, guess what they did with it.... 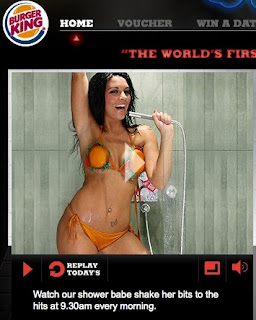 Look at her. She's wearing a bikini that is made to look like a burger. The only question you should be asking yourself is if you can get a double double with your order, laaaaadies.

Ok, that was creepy, but not as creepy as this whole promotion that is pretty much summed up as "Look at a hot girl sing while she takes a shower.. with a bikini on." Yes, you too can watch this girl sing in the shower if you CLICK ON THIS LINK

This whole thing really fits in with the Freudian breasts <-> Buttocks mentality. I mean, she has buns on her tits. What the hell is up with that? I mean, it's advertising... so any publicity is good publicity. Hell, this story alone just brings more attention to this breast/burger campaign and now you are aware of Burger King's latest venture by my journalistic integrity.

The scary thing is that there was some sort of huge push to find the perfect girl that will be singing in the shower while you conduct your male gaze on her;

In a nut shell, this is Burger King UK's campaign promoting its new breakfast. How does it promote breakfast since she's wearing a hamburger top? I do not know. It's marketed as the world's first guilt free showercam. Opposed to those ones you feel bad about when you are looking... right? 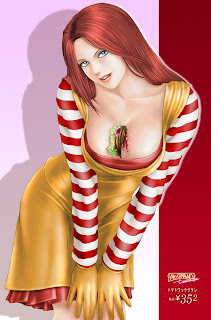 Ok. Maybe I lied. I mean, we constantly call tits Melons, right? But that's different. I don't think I ever got a melon at a fast food joint. I can't even remember when the last time I ate a melon was. What this does do is make me feel like there should be a balance here. We get to see some boobs, be it in burger form, why not do something for said boobs?

Don't get me wrong, I like boobs. I get sad when cancer takes one or two away from us as a society. So perhaps this Holiday season instead of buying trinkets for people, why not donate something to the National Breast Cancer Foundation ?
Posted by Booster Gold / Javier J. at 2:31 PM