News From The Front: The War On Christmas Front, That Is

News From The Front: The War On Christmas Front, That Is

Yes, enough about that silly war for now. I mean, we got another 18 months to criticize it, am I right? We should turn the attention to the war that we're knee deep in the trenches on.. That is the War on Christmas. 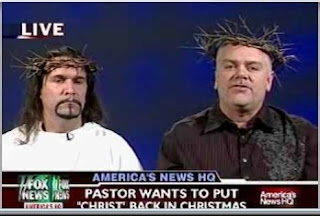 I suppose I should bring about this message of having Happy Holidays from the people who are badly trying to retake power over the most powerful military on the planet. The first step is to reclaim Christmas. Yes, that's right, we need to put the Christ back into Christmas and the only way to do that is to avoid all them stores who just say Happy Holidays and NOT Merry Christmas.

Now there's a new website that helps you avoid those Jew Bastard stores! 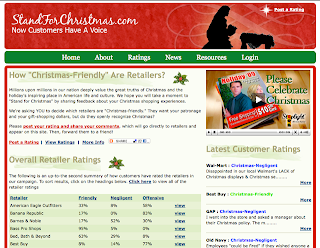 Wingnut Christians have a powerful new ally in the War On Xmas: It’s a website full of retailer ratings to let you know if maybe Jews or Atheists or (God forbid!) Muslims are making the Xmas Season less Christ-y! StandForChristmas.com reports and decides on which chain stores (WalMart) know the “reason for the season,” and which homosexual shops (Best Buy, The Gap) are trying to make nice with anti-American forces such as Muslims, Jews and Atheists. Let’s review the reviewers!

Macy’s:
* “Me and my family shop at Dadeland Macys in Miami Florida.The Salespersons are very friendly and Christmas Focus. I am a very Aggressive and Bold person for CHRIST any store that i spend my money in they better tell me Merry Christmas or a VOID will be following in seconds.”

* “I was looking for a Christmas Sweater and told by a clerk that they had not carried Christmas Sweaters for some time. I was disappointed. They used to have sweaters depicting the ‘Silent Night’, the Three Kings, etc. I find I frequent the store less and less frequently.” [The mythical Three Kings were Iranian Devil-Worshipers, did you know? -- Ed.]

Best Buy:
* “I wish I knew about this store prior to my purchase. The service was good and they were friendly. No Happy Holidays, no Merry Cchristmas nothing. Now I know why. Last time I shop here.”

* “Just bought an ipod from Best Buy, but then learned of their anti-Christmas/pro -Eid al Adha actions. I so regret having purchased from them. Best Buy, give glory to the one who has allowed and attributed to your success…Jesus Christ, not Mohammed!”

* “In your flyer advertising Black Friday the weekend before Thanksgiving, you had nothing regarding Christmas.. instead you had Happy Eid Al- Adha…a muslim religious Holiday. This is the United States of America, founded on Chrisitan principals, not Muslim. I am disgraced by this and will not shop your stores until you recognize the religious holiday that prevails in the U.S. - Christmas!”

* “It’s so rude that Best Buy has a Muslim Wish on the front of their WebFlyer. This is America! Wish us a Merry Christmas! I will not be shopping at Best Buy ever again!”

* “I was completely disgusted by the commercial on tv for the GAP. Not only was Christmas so casually mentioned, but to push the idea that it’s ok to do whatever feels right is so obviously against God and His Word. I for one will no longer shop at any company affiliated with the GAP. I pray that others choose to join as well. I also encourage others to pray for the people involved that God could reach them in some way and change their hearts and minds.”

* “You have offended the U.S. majority (Christians) by equating the birth of Christ with Wiccan soltice. I’m curious as to to buying power of Wiccans compared to the buying power of Christians? This Christian respectfully WANNUKAHS to cancel my GAP credit card in person in my local store. Other Christians - please let your local store manager know in person of your decision to no longer support their stores.”

* “Just heard about Gap deciding against Christmas. They are comparing Christmas to cults and witchcraft and encouraging folks to celebrate the ‘holiday’ in whatever manner they see fit. Come on, Gap, take a stand for what is RIGHT - you benefit from our Christmas dollars for Christmas gifts. Because of their stand on Christmas, I won’t be buying anything from Gap this year. Come on Gap! Celebrate Christmas! Jesus died for EVERYONE!” [Jesus *died* on Xmas? WTF? -- Ed.]

* “I was made to feel very uncomfortable by their employees who would only respond to my ‘Merry Christmas’ with a ‘Happy Holidays’. If they know I believe in Jesus, why can’t they just wish me a Merry Christmas???”

* “Shopping CHRISTmas friendly stores is very important to me. I do not believe that CHRISTmas advertising should begin until after Thanksgiving. The day to celebrate the birth of Jesus has become far more too materialistic, and seems to become that way more each. year. Loacally the CHRISTmas decorations, songs, etc. began before holloween. Absurd and disgusting. Thank God for Focus on the Family and all you do. God Bless each and everyone at Focus. Myrna”

Uh yeah because the BIBLE clearly commands that you can’t have Xmas decorations before Halloween, jesus fucking christ, you people are all lunatics. [Stand For Christmas]

Damn. I guess there goes the idea of making a nativity scene with Hitchens, Dawkins and Dennett as the wise men. As well as having Mary, Joseph and Jesus being authentically brown rather than American pleasing pasty white. 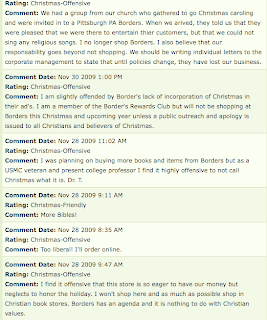 This part of is just too much:

* “Me and my family shop at Dadeland Macys in Miami Florida.The Salespersons are very friendly and Christmas Focus. I am a very Aggressive and Bold person for CHRIST any store that i spend my money in they better tell me Merry Christmas or a VOID will be following in seconds.”

I think I'm going to join the suicide rate that happens during this most depressing time of year. Merry Christmas doesn't go far enough. All they're wishing you to do is have a nice day in the near future, with no implication as to who is providing that day for you, (Jesus, in case you didn't know). If the clerk doesn't wish me a Christy Christmas I'm going to put out my cigarette in their eye, the way Jesus would have wanted it.

You two can follow this movement and not shop at stores that don't put the Christ in your shopping habits by following the list of stores in this following link: http://standforchristmas.com/ 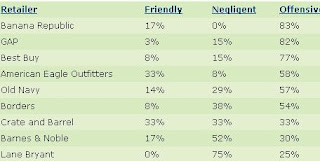 That is definitely what Jesus wants. He wants you to only spend your money to corporations who will gladly exploit your religious beliefs for profit. How christian of them to not give their money to the non-believers and liberals. Jesus was the ultimate conservative, vote with your dollars in the name of G-O-D!

Maybe this year I'll pretend to have no idea what Christmas is or what it's all about. I guess that's the only way to piss off those religious freaks even more. By taking the Christmas out of Christmas.

Or maybe I'll celebrate it by singing Christmas carols from the 1600s and 1700s, when they knew the true meaning of the season.

To conclude, I'le tell you news that's right, Christmas was kil'd at Naseby fight:
Charity was slain at that same time, Jack Tell troth too, a friend of mine,
Likewise then did die, rost beef and shred pie,
Pig, Goose and Capon no quarter found.
Yet let's be content, and the times lament, you see the world turn'd upside down. 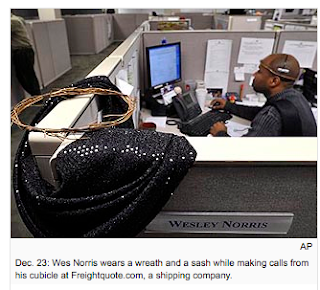 I'm not sure Jesus ever wore gothy sequined fabric from the oanns cheapie rack except maybe when he was the guy from Skid row in Jesus Christ Superstar. These folks really get up in arms when you take out Christmas from anything. I would pay money to see an edited version of It's A Wonderful Life airing on Christmas day "Happy Holidays, movies! Happy holidays, Emporium! Happy holidays, you wonderful old building and loan!"

How dare Christians try to take the focus away frm Santa and put it on Jesus. Santa has given millions of gifts every year to gleeful children and brought hope to America.. What has Jesus done for me lately? WHJDFML? Should have put a ring on it, yo. 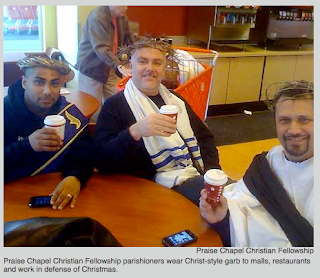 If you're wearing a crown of thorns, shouldn't the thorns be pointing in to scratch and pierce your flesh? Oh, I realize, that would actually hurt.. But wait, that brings up an even bigger issue. Why are they wearing that for Christmas? Shouldn't they wear the crown for Good Friday? Jesus wasn't rocking that style on the day he was born. It's bad enough Mary was poor, no need to have her crowning with a crown of thorns.

Never mind the fact that Jesus was a Jew and if he were alive today, he wouldn't be celebrating Christmas.. No wait, he would. Cause it's his fake birthday.. But he wouldn't be giving anyone shit, yo. No secret santa for him! Nah. He wouldn't celebrate it cause he would know it's not his birthday.. Holy shit, he has two birthday! He rose again. 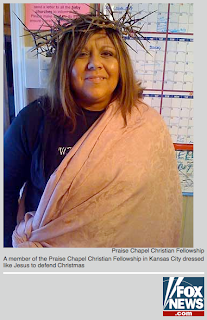 It's not like if someone says Merry Christmas to me I scream "I'M ATHEIIISSSSST!!!" in a cracking falsetto. Christmas isn't my favorite holiday by any stretch, but I don't mind imagery of christian mythology any more than I do imagery of Santa Clause. They both seem pretty far fetched and ideas that children subscribe to.

America just seems obsessed with Christmas as a whole. It's really an unhealthy obsession. We should rename the US to "Santa's workshop" and tell everyone they're all elves and it would be a better way to sell communism to the masses. You know what happened on December 25th? Not the birth of a brown baby in the desert. James Brown died. And that in itself is something we should Celebrate.

Merry Jesus to you and may you have a jew-free New Years.
Posted by Booster Gold / Javier J. at 6:43 AM