Poking The Idea of Needle Exchange

Poking The Idea of Needle Exchange

A couple of weeks ago in a quick post about pot getting a victory in Washington D.C., I mentioned that the bigger news story in that piece was that there was going to pass a law about needle exchange. That it was more important than the whole pot stuff. I got some feedback in that people were still opposed to it. I had to stop for a second and realize that there was still any sort of backwards place that would be opposed to this.. I still don't know if I can believe it. I mean.. really?

It shocked me to no end that there were people like this one fucker on Freeper who had this to say on the matter.

I prefer the Darwin method.

So why all the clamor for this new cause du jour? It comes down to the worst kind of political pandering to a tiny special-interest group. Sure, everyone can feel better about themselves for allocating taxpayer dollars to needle exchanges, but, ultimately, it's nothing more than misguided, phony compassion. There's nothing caring about swapping needles. It's another example of symbolism over substance. But it's even worse than that.
This idea is the natural extension of the condom distribution scam. The same activist groups promoting needle exchanges continue to insist condom giveaways are the best way to safeguard people from contracting AIDS sexually. In both cases, however, we are not treating the root problem -- namely, irresponsible behavior. In fact, we're condoning it. Just as anal sex, with or without a condom, is risky and potentially deadly, so is drug abuse -- with or without clean needles.

How can we justify taking even one dollar away from research into finding a cure for AIDS and spending it on such reckless fantasies? Let's face it. In this age of deficit spending, there's a limited pool of federal money available for all health issues. If some local governments in New York and San Francisco want to experiment with wacky ideas, God bless them. But let's not force the rest of us to subsidize their Kevorkian- style madness.

The needle-exchange lunacy is evidence that our society is losing, not only its moral center of gravity, but its ability to reason -- to think logically and respond rationally to political, social and medical problems.

Let me give you an analogy: You see a guy playing Russian roulette with two bullets in the chamber. One bullet, in this case, represents the imminent death a drug user faces from organ failure or accidental overdose and the other represents the dangers of contracting AIDS. This policy is the legal, moral and practical equivalent of, upon finding such a person, removing one of the bullets from the gun, giving it back to him and saying, "OK, continue your game."

Is there any individual -- let alone society -- who wants that on their conscience? Not me.

Since the AIDS epidemic began in 1981, injection drug use has played an increasing role in the spread of HIV and AIDS, accounting for more than 60 percent of AIDS cases in certain areas in 1995. To date, nearly 40 percent of the 652,000 cases of AIDS reported in the U.S. have been linked to injection drug use. More than 70 percent of HIV infections among women of childbearing age are related either directly or indirectly to injection drug use. And more than 75 percnet of babies diagnosed with HIV/AIDS were infected as a direct or indirect result of injection drug use by a parent.
[...]
In February 1997, Secretary Shalala reported to Congress that a review of scientific studies indicated that needle exchange programs "can be an effective component of a comprehensive strategy to prevent HIV and other blood borne infectious diseases in communities that choose to include them." She also directed the Department's scientific agencies to continue to review research findings regarding the effect of needle exchange programs on illegal drug use. The scientific evidence indicates that needle exchange programs do not encourage illegal drug use and can, in fact, be part of a comprehensive public health strategy to reduce drug use through effective referrals to drug treatment and counseling.

more than 75 percent of babies diagnosed with HIV/AIDS were infected as a direct or indirect result of injection drug use by a parent.

Let me repeat that in bold so you can re-read the statement.

MORE THAN 75 PERCENT OF BABIES DIAGNOSED WITH HIV/AIDS WERE INFECTED AS A DIRECT OR INDIRECT RESULT OF INJECTION DRUG USE BY A PARENT. 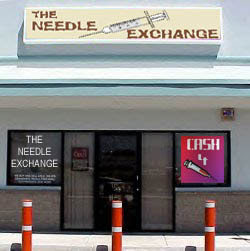 Can you fucking believe that? I know the internet is full of assholes, I'm one of them. But even I wouldn't dare call myself a "moralists" and run around saying shit that is clearly smoke blown directly up my ass with a straw. These Moralist are full of shit because what they stand for is the exact opposite of any real morality.

Social conservatives demand purity even in the face of good policy... I know, shocking. I shouldn't be surprised but I am. It's like being surprised that the sun is coming out in the morning. But how dare they say that those AIDS babies must pay for their junkie parents' transgressions, isn't that right you fucking red neck hicks. Demand blood and pain. That's the ticket.

Needle exchanges? Fuck that! Why would you want the government encouraging the use of hard drugs, am I right? Around 2000, Sydney established the medically supervised injection center in King's Cross. It was intended as a trail to examine the effect of a supervised injecting room where one would have drug uers in the suburbs. After the usual stream of vitriol from conservatives and Sydney business owners about druggies filling up the streets, it was built and has been running for 8 years there down under. It's operated by Uniting Care, a part of the Uniting Church. Which is a bit of a surprise to see that at least Australian God botherers actually do that whole "help the unfortunate" and "do unto others" business that the churches here claim to.

The Sydney Medically Supervised Injecting Centre (MSIC) aims to reduce harm associated with illicit drug use by supervising injecting episodes that might otherwise occur in less safe circumstances such as public places or alone. Specifically, it is anticipated that supervising such injecting episodes will reduce the risk of morbidity and mortality associated with drug overdoses and transmission of blood-borne infections, while providing ready access to safe needle syringe disposal. It is also hoped that by extending the circumstances in which health professionals have contact with injecting drug users (IDUs) more, particularly those most "at risk", will be engaged with the health and social welfare system sooner than otherwise.

No drugs are sold or kept on the premises. Registered clients receive clean needles and equipment, and advice about their health.

The MSIC conducts tours of the premises for members of the public on a regular basis.

Here's a 2003 Report into the Center by the MSIC Evaluation Committee, and here's number of background articles and reports on the Centre up to 2008. The conclusions of the 2003 report include:


Basically all the bullshit complaints against the center turned out to be wrong and it has had a measurably positive impact on the lives of people who had nowhere to turn to before. Since then the fine folks in Sydney have seen the installation of sharps containers in public bathrooms in the City and some positive steps to treat drug addiction as an illness and not a crime. 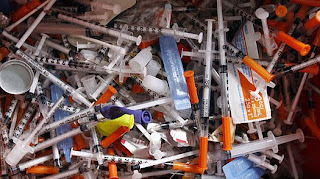 It's really simple. This shit works. Sadly they don't consider it in the states. Since 1989, Congress has restricted the use of federal funds for needle exchange programs. These are the same fuck ups and voters of fuck ups that opposes HPV vaccines. They also actively oppose vaccine use to control the spread of HPV in young girls because protecting them from a disease will make them more likely to fuck more, I guess. Who knows why really. Causation is usually hard but, for them, it may be REALLY simple. Just my read on their thoroughly idiotic reasoning.

I mean, as long as the baby survives long enough to be born, conservatives don't give a shit what happens after wards. Maybe the baby should pull itself up by its own bootstraps and develop a cure for aids, right? What kind of morons defend an unborn childs right to life but beyond that just doesn't give a fuck about its well being after. Introducing needle exchanges and free condom programs is pretty much the number one reason our government got HIV rates to some of the lowest in the world. 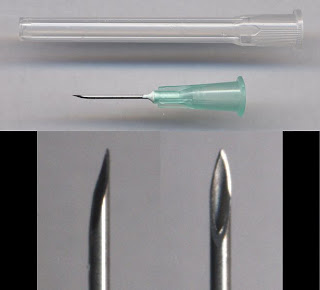 To assume that people will be encouraged to do more drugs is like saying that the presence of hospitals encourages people to take risks with their health. We might as well abolish medicine. It's really sad that the only time a conservative believes in darwinism is when it's misapplied to marginalized poor people.