In my daily attempt to find something about the catholic church to mock I came across this and my life has changed forever. Well, at least till the next blog post, which should be within 24 hours. I'm on a roll here.

Even though I was an alter server and I went to catholic school for most of my life, I still don't get a lot of the religion. I guess that happens when you stop believing the lies and become an atheist. But much like the famous "Things white people like", this following site tracks what Christian Culture likes

It's a comical site.. a lot of it seems actually serious in a sort of tongue and cheek sort of way. But there was one article that grabbed my attention.. It was last year's August entry which really had me bent over backwards laughing.. 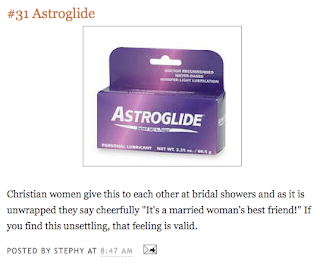 #31 Astroglide;
Christian women give this to each other at bridal showers and as it is unwrapped they say cheerfully "It's a married woman's best friend!" If you find this unsettling, that feeling is valid.

Even if this is a humor website, it does make you wonder. I mean, we already knew that Christians were so fucked in the head about sexuality. No wonder a lot of the men turn out to love the cock when they've been fighting it all their lives through persecuting gay rights. Maybe it's just that, in a hilarious turn of events, that these prim and proper Christians go so long without sex that the men don't have a clue what to do and the women are probably dried up by then anyway.

Nothing says "Thank you Jesus" like some astroglide. I mean, Jesus does keep them all dried up. He rose again.. that much is true, but he didn't arouse on that third day.. Guys, just don't tell them that they can orgasm. It'll ruin EVERYTHING! I guess the comments had me laughing even more.

Wait a minute. Let me get this straight. Said women use astroglide because their men don't even bother trying to turn them on enough that they might self-lubricate? That could possibly be the saddest thing ever. It's one thing if it's women who are aging or having medical issues causing trouble with self-lubrication, but apparently this is being given as routine advice to newlyweds in a culture where people marry as young as they possibly can. This is not something to give thanks for.

I don't know whether my response is "That's terribly depressing" or "my life feels pretty great right about now." I guess the moral of this story is that religions are telling their women that they have to submit to their husbands whenever they are in the mood. It doesn't matter if she's not in the mood for it, just have some astroglide and think about what you're going to be making for dinner while they grunt and moan their way to pleasure.
Posted by Booster Gold / Javier J. at 6:31 PM