Tori Amos During The Holidays Is Crazy

Tori Amos During The Holidays Is Crazy

Ha. What am I saying. Tori Amos ANY TIME of the year is crazy. Bat shit insane. Don't get me wrong, as a red head I automatically have a lot of love for her. But she was never sane at all, ever

Let's talk about Tori Amos. I'm sure you've heard of her. She's the redheaded pianist/singer/songwriter and used to be truly innovative and talented musician. She release a string of great albums in the 90's and in this one bloggers opinion, was one of the most interesting and unique artist of that decade. She was always a bit eccentric, but was also a musical genius, so it was Ok.

But since around 2001, she fell into a steady decline, releasing a string of progressively shittier albums with progressively more embarrassing titles (Abnormally Attracted to Sin?!). Basically she became a parody of her former self. Now she has hit a new low with the release of "Midwinter Graces," a Christma- oh, I'm sorry, a "seasonal album." which is on the level of a Kenny G move in order to strike sales. In the case of Tori Amos it's a lot worse because she has spent a majority of her career writing songs about how much Christianity sucks.

How is it? Bad, but that seems to be a given these days. What pushed me to talk about this hopefully ignored album is the "Promotional DVD" that was released with the album. I can't really describe how bad this is, so why don't you see for yourself.

It's not pretty. Let's start with the basics, she has not aged gracefully, to put it mildly. Her more loyal fans will deny it but it does seem that she's had plastic surgery. Meanwhile her eyebows now go up at the end and she can barely move her face to sing. She has a serious case of Cat Face going on and it looks like cinematographer's in the video were instructed to make her face look as pasty, frail and clown like as possible.

It's really sad. Tori used to be one of the most natural beauties in the business and I'm not even factoring the whole red head obsession I have going. Then at some point she ran over her face with a floor buffer and she started going bald, which she covered up with ridiculous wigs. 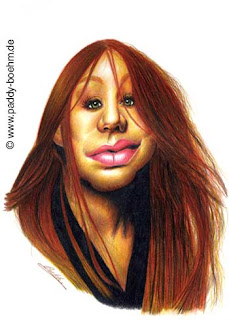 I'm also pretty sure she's addicted to some hard drug. Her former BFF, Neil Gaiman dodges question about her and it doesn't speak well for her social life and her albums have been getting just plain horrible as she's gone from working a clever nymph gimmick to being absorbed completely by her persona.

As for the content of the interview.. it's seriously 30 minutes of her rambling like that video. Making absolutely no sense about anything. She laughs at inappropriate times and she takes long pauses to stare blankly at the floor. She is completely obsesed with her Daddy issues, but then again, that's nothing new as her whole career is based on them, I guess it didn't used to feel so creepy.

With "Midwinter Graces," Tori's transformation into a jedi master of crazy is complete. She's the crazy grandmother who grabs your wrist at family gatherings, and you think you can make some excuse and get away if only she'll stop talking for two seconds.. BUT SHE NEVER SHUTS UP! 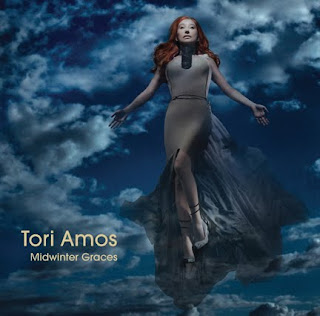 I know a lot of artists start phoning it in at some point when they go past their peak, but there are plenty of female artists over 40 who still seem to have it together. There's Kate Bush, Kylie Minogue, Dolly Parton, Alison Goldfrapp, PJ Harvey, Bjork, Madonna.... Ok, I'll get shit for that but I'm sure she wouldn't let anything like Midwinter Graces interview hit the market. Maybe it's just that all these women have been able to reinvent themselves through the yeas and do something fresh and new. Whereas Tori seems determined to keep up the angsty-girl-with-piano-singing-about-rape bit that she's been doing forever.

Her only change seems to have been right after Y Kant Tori Read. What happened? Did she do too many drugs? Has she surrounded herself with yes-men to the point where she believes that every thought that comes into her head is genius and must be shared? Or she not care anymore and is just putting out albums left and right to make a quick buck off her equally crazy fans? 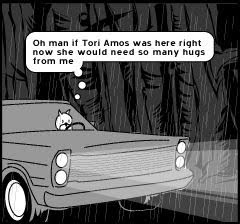 I think that the birth of her daughter in 2000 is also to blame. She's just too damn happy now! I also get the feeling that she has built this Tori Amos character, and she herself is totally different in real life now. It's like Trent and NIN keep on ranting about being completely emo and yet it seems that Trent is a happier person these days. Or if Zach De La Rocha from Rage still screaming about being poor. It eventually loses its meaning.

Her albums have progressively gotten shittier and I keep buying them like an asshole. So, basically, she's a one-woman version of Weezer. I will say that she's still pretty good live. I saw her two years ago and it was a good show. But let me dismiss any rumor that you'll be lucky to go to a Tori concert because of the women. I don't think you'd want any girl you picked up at a Tori Amos concert. 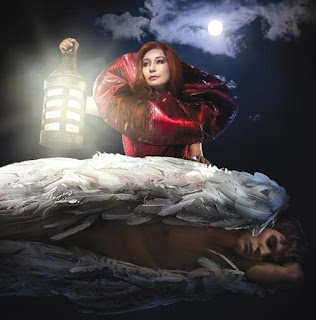 I did like Scarlet's Walk but since that album every track she's done has had the exact same instrumentation and feel to it, and that's when she really started getting predictable with the lyrics too... (Come on, there was a track called "Mrs. Jesus," that sounds like someone doing a Tori impression on SNL.) I'm being glib about it, but it actually does make me sad since I used to be a pretty big fan of hers. So this Holiday season you shouldn't buy the Christma- Midwinter Grace album and just remember what this train wreck of a once-amazing career used to sound like.
Posted by Booster Gold / Javier J. at 3:18 PM